There comes a time in life where respect is more important to your well-being than the security of a lengthy position. Meet, Karen Rathwell. A loyal, dedicated, single parent with financial responsibilities and looking to change her life.

After 26 years at a desk in the provincial justice system, the smile on her face from a job well-done, was noticeably disappearing and job satisfaction was just about depleted.

Pondering her options, Karen had specific criteria that had to be met with her next career move. Government administration had become unfulfilling so she began to look at the opposite end of the employment spectrum to a completely new career, where she would have to learn the job and continue to learn.

“I was looking at careers way outside my comfort zone,“ said Karen during a telephone interview, “I wanted to do something completely different. So I began to do some research on the internet and I saw the advertisement for training heavy equipment operators. I thought, that is a complete 180.’” 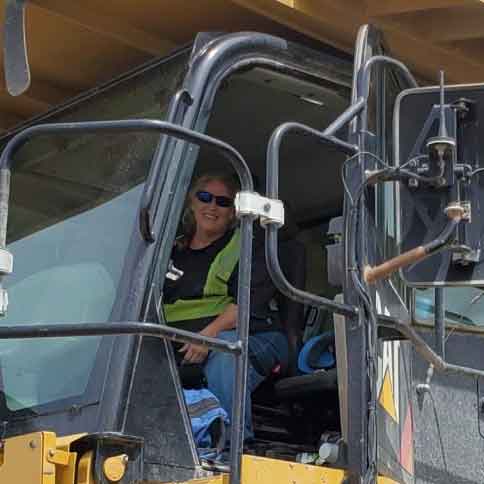 “I could have gone up North, but I didn’t want to be away from home or my kids for extended periods. I started my job search closer to home…”

Internet research led Karen to the Articulated Rock Truck (“ART”) program at Interior Heavy Equipment Operator College’s Innisfail, AB, site, where she began training one month after leaving her job at the courthouse.

“I really enjoyed my time at IHE,” Karen continued. “The instructors were knowledgeable. I learned a great deal in the classroom theory. In fact, outside of training, I would find myself sharing what I had learned, teaching my kids about things like soil erosion when we would pass road construction while driving.”

“I could have gone up North,” she recalls, “but I didn’t want to be away from home or my kids for extended periods. I started my job search closer to home. One of the instructors from IHE gave me a contact to have my resume written professionally. I mean I had only had two previous jobs, not even close to the HEO field, and I was starting my 50’s.”

Wanting to cover all her bases, Karen also researched trade unions that HEO operators belonged to and contacted one that was located 10 minutes from her home in Calgary, AB. The union office said that there would be an ART position coming up but that they needed a Data Entry Clerk immediately. “I can totally do that,” said Karen. (Did you take that job?)

With a professional resume in her grips, Karen went to the union hall, introduced herself, and left a copy behind at the beginning of July, 2014. By September, she was sitting in an interview for an ART position at Inland in Calgary. “I was nervous to interview,” she continued, “as this was really only my third job in my career. I didn’t exactly have a lot of practice.”

Six years later, Karen is still working as an ART operator for Inland where we spotted that smile from behind the wheel.

First the operations manager met her and then she sat with who would become her direct supervisor, “That interview turned to hockey talk” she laughs. “After that, I was totally comfortable and I got the job.”

September 18, 2014 would mark the start of Karen’s new career. Immediately she was working 12 hour shifts, six days a week, earning two-dollars per hour more than her previous career and with overtime, was “taking home a really nice cheque.”

From working entirely with women, to working entirely with men, was a thought that occupied Karen’s mind but quickly dissipated. “The men are so patient. They continually share job specifics, welcomed me to the team with open arms and kept me on my toes. In particular, my loader operators are great at providing guidance to me on the job. I make sure to appreciate them each year with Christmas baking,” she laughs.

Inland required Karen to learn two pieces of equipment. IHE taught her the 730 Rock Truck and Karen would also learn the 773 Rock Truck through her employment.

Wrapping up our conversation, we asked if there was anything she wished she had learned at IHE that she had not. “Yes,” she stated. “I wish I could have experienced how far the cab of an ART can lean before it goes over. It happens on the job to everyone at least once, so when it happened to me, I was unprepared.”

Six years later, Karen is still working as an ART operator for Inland where we spotted that smile from behind the wheel. She works her “butt off” regularly April to November and then is laid off during the colder, unpredictable winter months. She loves her job, loves being part of the team, feels valued and respected and her smile has returned to her face. 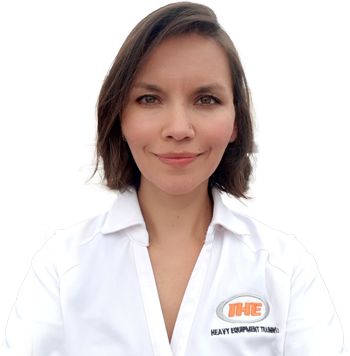 Our expert sales advisors will match you with the course that best suits your budget and timeframe.

IHE would like to acknowledge that our corporate offices, as well as our  training sites are located on the traditional, ancestral, unceded territory of the Syilx Okanagan, Treaty 6 and Treaty 7 people of Canada.